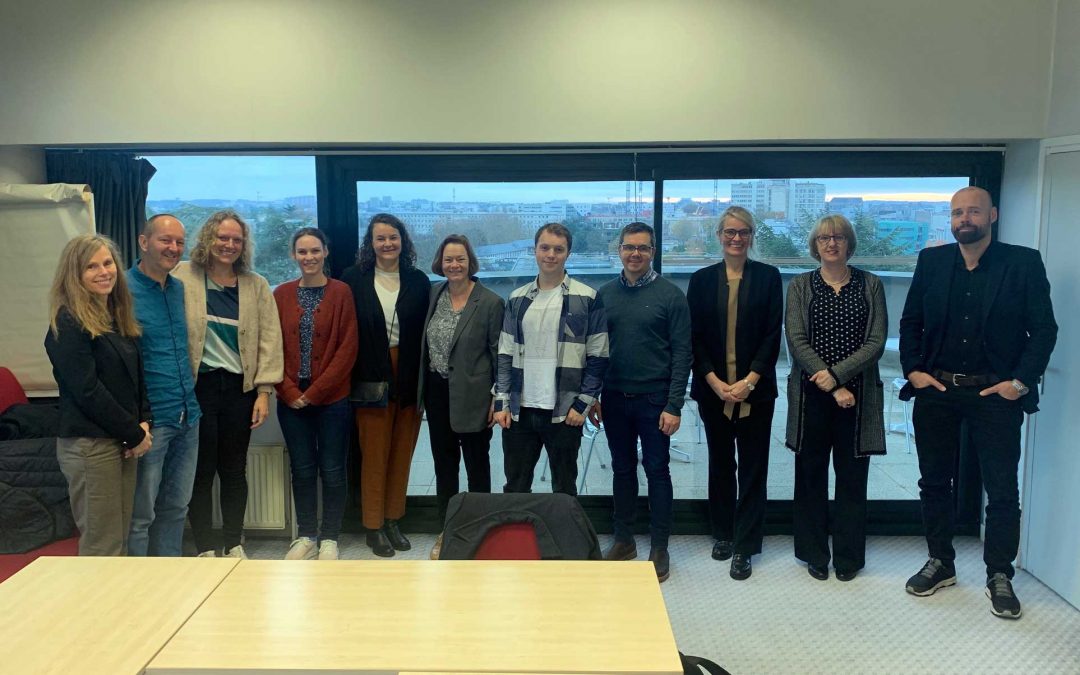 A delegation of senior faculty members from Inland Norway (INN University) recently visited the Villejean campus for several meetings with Rennes 2 academics as well as local partners with the aim of further developing the close partnership that the two universities have formed thanks to their mutual affiliation in the EMERGE consortium.

A group of faculty members from INN University were welcomed last week during their 2-day trip to Rennes 2.  The objective of the informal visit was to discuss ways in which to strengthen the partnership between the two institutions at a project-specific and departmental level.

Rennes 2 and INN have been working closely together since 2019 when both became founding members of the EMERGE consortium (European Margins Engaging for Regional and Global Empowerment). Together, along with 7 other European partner universities, they have been striving to create specific teaching and research projects that will allow both faculty and students to benefit from this close relationship.

The delegation from INN University included:

While here, the delegation attended meetings at: the Movement, Sport and Health Sciences laboratory (M2S) with faculty member Guillaume Nicolas, the Sports Management Master program, hosted by Noemi Garcia-Arjona and Pim Verschuuren, as well as meetings with the DIGISPORT (Digital Sport Sciences) managers, Richard Kulpa and Benoit Bideau, Rennes 2 Vice President of Valorisation. DIGISPORT is an international graduate school, unique in its kind, in the field of training and research in sport and digital sciences. Their Master’s degree is distinguished by its modular nature, which allows students to customize their curriculum according to their professional project and chosen job profile. Closer collaborations in the domain of sports sciences could prove very fruitful to both institutions as one of INN’s six campuses is also home to the Lillehammer Olympic and Paralympic Studies Center (LOSC) – a source of competence and research on Olympic sports and the management of sports and sporting events.

The delegation also had a productive meeting with a mix of faculty and actors associated with the gaming community in Rennes. The goal of the meeting was to find synergies between the different academic programs which are linked to gaming in both institutions in order to develop exchanges or joint courses for students and faculty. Present at the meeting from Rennes were: Marie Boivent, Head of the Fine Arts Department, Pierre Braun, Head of the Design and Social Sciences Master program, Thierry Lefort from the Master program in Digital Creation, Antonin Broussard, from the Rennes 2 Esport Club, and Alexandre Dupont and Aymeric Lesné, from the organization 3 Hit Combo. Created in 2005, 3 Hit Combo is directed by Aymeric Lesné, a former Rennes 2 student. The organization heads StunFest, a Rennes-based international video game festival which attracts some of the world’s greatest gamers, enthusiasts, creators, researchers, alongside more than 13,000 festival-goers.

The gaming industry in Norway is highly sought after and is frequently mentioned to be the game development capital of Norway. INN’s Game School operates a fully rigged motion capture studio located at PARK in Hamar. In addition to close collaboration with the public and private sectors, the Game School collaborates through AR, VR and game projects with several INN faculties as well as other academic institutions in Norway and abroad.